Something to fall back on, Not that he'll need it.

Blossom on the Beeb 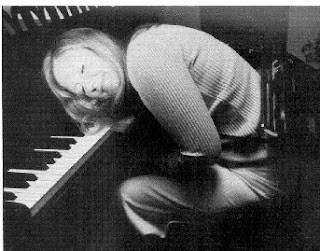 In December 2008 the One Shot Wonders series that I help oversee for SSJ Records (Japan) released a terrific one off by singer Flo Handy. At the time, had I known about the existence of this additional single by the singer on the same label, I probably would have added it as a bonus track to the CD. Then again maybe not, due to the vertiginous drop-off in quality from the body of the album proper. This track represents a pretty bad attempt to get down with the new kid music. As for the flip side, "Go Stand in the Corner," I haven't heard it, so I can't vouch for the quality. Though the pedigree of the writers, Floyd Huddleston and Al Rinker, is well-regarded, still I'm not holding my breath.

"Rifftides" Doug Ramsey on Jazz and other matters...

To borrow from Paul Williams’s words to Ivan Lins’ “Love Dance,” Winters knows how to turn up the quiet. Using subtleties in phrasing, pitch, intensity and tone shading, she takes ownership of a song without violating its writer’s intentions. Here, her bossa nova repertoire includes Jobim, Lees and Moraes, plus Brazilianized songs by Cole Porter, Dave Frishberg, Bob Florence and Jack Jones. A highlight: her caressing of Jobim’s and Lees’ “Dreamer,” which also has one of several simpático tenor saxophone solos by Pete Christlieb. Years pass between Pinky Winters albums. When one appears, it is an event.
________________________________________________________
And check out that kraaaazeeeee backup singer on track two!