On a net listserve to which I subscribe (have for years), one of the other members, who generally tend to obtain to fairly decent taste, recently wrote the following somewhat shocking paen to Wayne Newton (he of the permanently frozen forehead):

:>> I have always liked him. He's an excellent performer

Chacun a son gout, I suppose. About 15 years ago I went to see Newton perform "live" in Las Vegas basically to find out if he was as charisma-less in person as he appeared to be on TV. He turned out to be all that and then some. Plus, his "look how versatile I am" schtick wore thin very quickly. Even his tribute to Noel Coward. . .. (Just checking, to see if you're paying attention.)

I was crammed in with a table full of approximately sixteen others. All of whom were good ole proles. Since I can feign egalitarianism with the best of 'em, I chatted them up a bit. I was somewhat surprised to discover that not a single one of them had actually ever even heard or seen Newton before. It was simply that he had so successfully branded himself, that for all of these fine folk, the idea of visiting Vegas without "'a goin' to see the Wayner" was pert nigh (see, I told you I can blend in) unthinkable. Sorta like the canine territorial act of peeing on a tree.
Posted by Bill Reed at 8:05 AM No comments: 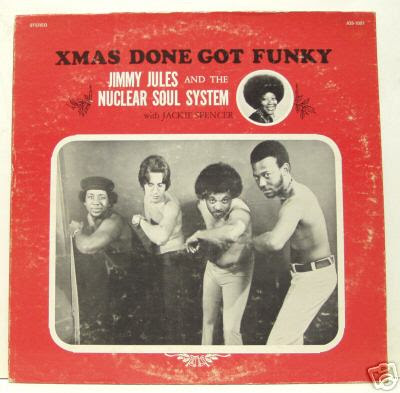 ____________
Some krazeee kat in Japan just paid 455.00 smackers for this LP. But you can hear the immortal title track for free. I hope to include it on my forthcoming compilation CD, "The Worstest Christmas Ever."
Posted by Bill Reed at 8:28 AM 1 comment:

KURO IN A RARE MOMENT OF REPOSE AND REFLECTION 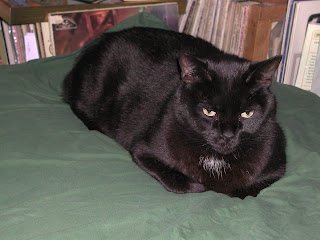 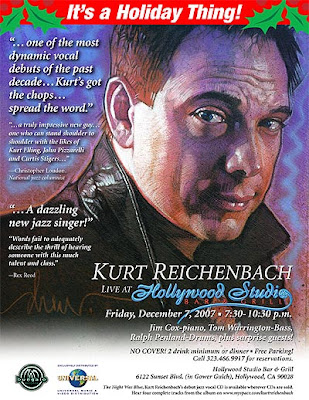 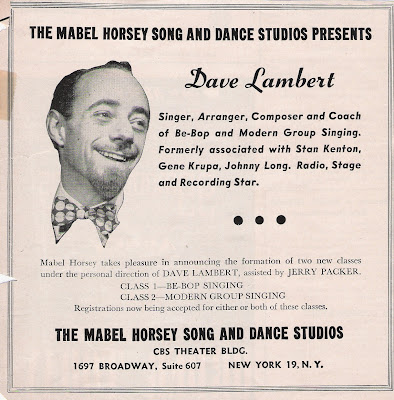 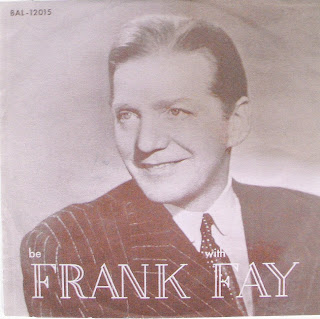 ___________
The material isn't all that killer, but the insousiance of the delivery by the near-legendary Frank Fay more than compensates. Click ici, aqui, here to hear (patience please, it's a 25-minute track).
Posted by Bill Reed at 8:51 AM No comments:

Today is the birthday of two great American artists: singer Jo Stafford and singer-pianist Audrey Morris. Long may they wave (and swing).
Posted by Bill Reed at 8:53 AM No comments: 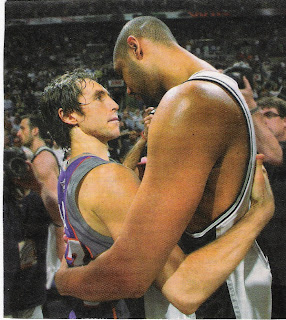 I woke up in the middle of last night screaming, regretting the use of phrase "in her prime," in reference to jazz singer Lee Wiley on a Yahoo list to which I subscribe. In fact, many serious Wiley devotees consider late-period Wiley to be her greatest era. I also observed that those who listened to Wiley's recordings when they were initially issued, perhaps did not how drop-dead gorgeous she was. But, come to think of it, my buddy Wayne Knight does, indeed, have an extraordinary and gasp-inducing Wiley collection that contains dozens of studio glamour shots of Wiley in her pri. . . ., uh, I mean from the late 30s and early 40s.

Beyond all of this hairsplitting, however, the fact remains that this great singer is known by so relatively few fans of the art form. Wiley is clearly the greatest --- extra-categorically --- unknown American artist. (By comparison, she makes the likes of Edward Dahlberg seem like a household name.) Even amongst seemingly devoted followers of American Popular Song. A few years ago, on the aforementioned list, I wrote:

"Wiley had enough extra-musical mythic resonance to have guaranteed remembrance of her. I picture her as a kind of jazz-singing Dorothy Parker."

And yet, even though the Japanese have produced a prime time network TV special concerning Wiley (sans any moving footage, alas) she still "can't get arrested" in her native land. It's puzzling: Billie Holiday was probably not exactly a household name either in her pri. . . uh, well you know what I mean, but almost everyone---including the majority of the multitude of my culturally illiterate American brethren---at least knows the name.

Maybe because Wiley recorded for such small labels that apparently let her record exactly what she wanted to, which included the invention of the single-composer Songbook concept. For that reason alone, she deserves...oh, never mind. The subject of Lee Wiley's obscurity is a major Baroque worry of mine. Can't figger it out. If you can find a lone Wiley divider card in a single so-called "big box" store in all of this great land of ours, I'll eat it.
Posted by Bill Reed at 9:16 AM 1 comment:

I finally bought this highly-praised 1957 vocal recording which has just come out on CD. Well worth the wait. More than lives up to its vaunted rep. His only outing in a modern jazz format (there was also a swing-style recording on which Don Nelson is mostly heard instrumentally).

Here is a portion of the liner notes:

Underlying the calm exterior of the music business there is a ceaseless rumble going on with respect to artistic appeal as opposed to commercial appeal. The essence of this controversy is often found within the artists themselves who seek to gratify a creative urge while appeasing the less stringent demands of the public. Finding a middle road between these two extremes has been the good fortune of very few singers, and becomes the object of Don Nelson’s first major recording.

The Nelson family, into which Don was born in Hackensack, N.J., was one with a musical destiny as the success of brother Ozzie indicates. Through this natural association, Don studied tenor saxophone during his formative years, working with high school dance units, and later with a Navy band in Sampson, N.Y. Following the war, Don enrolled as an English major at the University of Southern California, and though he nurtured his interest in music by playing occasional jobs, his academic training was slanted toward a career in radio and television writing which he pursues in partnership with Jay Sommers. As this new-found outlet began to blossom and take shape, his career in music was necessarily sidelined.

During all of these years, Don has been acutely interested in the evolution of vocal patterns and presentations. As a boy he sang for the amusement of his immediate family and tried his hand at the art during his Navy days. Disk jockey Jack Wagner of KHJ in Los Angeles encouraged the young man to explore his vocal interpretations, feeling that distinctive self-expression can always find its place in the field. Out of the mass of experience and sustained observations, Don began molding the fabric of a vocal recording.

In contrast to established procedures, he first selected the trio backing which he felt would best support the tunes and tempo he had in mind. For the vital piano slot he installed the inimitable Jimmy Rowles whose duality as accompanist and soloist has attracted nation-wide admiration. For the bass parts, Don called on the immense talents of Leroy Vinnegar whose booming drive has been the backbone of so many successful jazz units. His drummer, Stan Levey, is a pioneer in modern percussion and one of the most flexible men in the business.

The choice of tunes was exclusively Don’s prerogative, as was the variety of presentations. In addition to collaborating on the arrangements with Jimmy Rowles, Don injected his instrumental personality on several tracks, playing the seldom heard recorder. This ancient instrument, with its flute-like tones, has been the object of Don’s interest for several years, an outgrowth of his personal affinity for all the members of the reed family. With profound respect for the musicians who accompanied him, Don Nelson offers this interesting program:

Available at the fine Dusty Groove e-commerce site for, wellll, a song. Well worth it and then some.
Posted by Bill Reed at 6:53 PM No comments: