What a great way to end the year! 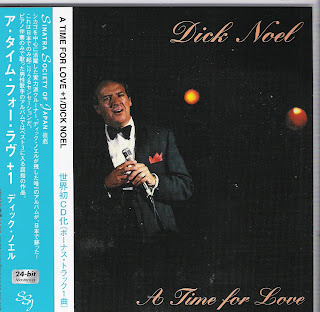 _______________
In my never-ending quest to find "new" releases for SSJ Records' (Japan) "One Shot Wonder" vocalist series (the criterion is that the singer can only have made ONE album), the Fall of 2006 found me crawling around in a sub-basement (don't ask) in Glendale, CA. That's where I came upon singer Dick Noel's 1978 album "A Time for Love."
I knew of Noel, but mostly as one of the busiest session singers in the entire history of the profession. Operating out Chicago, rumor has it that his voice has been heard on more than 13,000 commercials and jingles. That might be some kind of a record. But I was unaware that he'd ever made an album, only a handful of mostly undistinguished singles in the 1950s. But there it was! And with as rarefied a collection of selections from the Great American Songbook as one could imagine.
I took the LP home and was astonished by what I heard. This beautifully supple, rich, male baritone backed by the solo piano of Chicago legend Larry Novak, singing his heart out on such as "A Time for Love," "Here's that Rainy Day," "Why Did I Choose You?" and seven more.
It wasn't until I arrived back at my flat that I noted the liner notes for this sub-rosa release on the small Legends label were written by Mel Torme, who could not have been more complimentary even if he had been writing about himself! High praise indeed!
I immediately took the necessary steps for SSJ to license the recording for re-release and to try and track down Noel. I succeeded at both. In the process, it was especially rewarding to make the acquaintance of the singer, who is now happily retired from the jingle mill and living in Southern California. Of all the things that he has since told me about his long, interesting career, stretching back to just after the end of WWII, none was more fascinating to me than the details of the recording of "A Time for Love" itself. He wasn't familiar with some (perhaps even "most") of the songs that pianist Larry Novak set before him at the beginning of the lone session for the album that commenced at midnight (although there are several '78 dates inexplicably listed on the back of the LP for the recording, Noel swears that there was only ONE) and lasted until six a.m. He is a crack sight reader, able to read the proverbial fly specks off a sheet of music. And he followed the lead of Novak's playing and really dug into the emotional core of the songs, as often as not in only one take, even though not entirely familiar with some of the material. Must be the up side, end result of all those years of having to instantaneously excavate the "meaning" of all that advert music copy.
Finally, even though I prefer to believe the more mythically resonant lone session version, the number of them that finally went into the making of "A Time for Love" is immaterial. Today, the results of Noel, Novak and original executive producer Wayne Knight arrived in the mail from Tokyo. My name is also on it as "Release Producer." Of all the record projects I've been involved in the last few years, none has made me happier than this one. In my opinion, Noel and Novak's recording is on a par with Irene Kral and Alan Broadbent's 1975 classic "Where is Love?" And it just doesn't get much better than that! Here's a taste.
"A Time for Love" is already for sale at the trustworthy, loyal, helpful, friendly, courteous, kind, and thrifty cyber commerce site: http://www.dustygroove.com . Right now, it appears to have already sold out, but keep checking back. They're certain to have it back in stock soon.
Posted by Bill Reed at 12:57 PM No comments:

On the broadcast this evening of the Kennedy Center honors ceremony held earlier this month, the writers of the presentation clearly bent over backwards to avoid mentioning the actual name of the group with which honoree Diana Ross rode to stardom. "These girls," "the group." "these young women" and about a half-dozen other euphemisms, but NEVER "The Supremes." One would have to be deaf and blind not to have noticed. Very embarassing. I wasn't exactly expecting a surprise appearance from Mary Wilson, but puh-leese. And I'm not even exactly certain that the word "Motown" was uttered. (Roots, girlfriend, roots!)

I wonder if these oversights were part of a deal made with Diana Ross in order to get her to accept the Kennedy award: "No direct eye contact, a wind machine and operator to keep my-just-got-f**ked trademark hairdo poifectly poofed and, above all, no mention of those other two beyatches EXCEPT by indirect inference."

I'd like to think so, but these couldn't have been unintentional oversights. sad Sad SAD. A very talented woman who just can't seem to get it right.

And what was the deal with that exceedingly tarsome appearance by Richard J. Potash in the Steve Martin segment?
Posted by Bill Reed at 10:04 PM No comments: 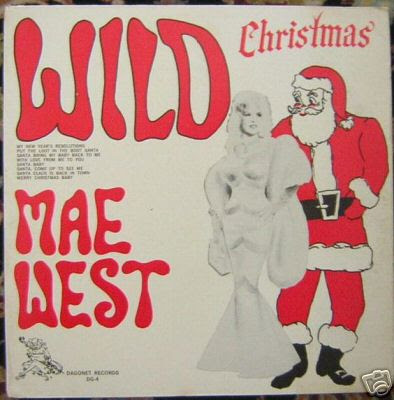 1. Merry Christmas Baby
2. Santa Baby
3. Santa Come Up and See Me
4. Put the Loot in the Boot, Santa
5. It's Christmas Time
6. In the New Year
7. Santa Bring My Baby Back to Me
8. Love From Me to You
download here: Mae West Christmas Album
Posted by Bill Reed at 4:04 PM No comments: 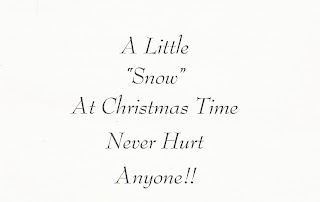 Kurt Reichenbach is right up there with John Proulx, Lincoln Briney, Bruce Hamada and John Harkins in the best new male jazz singer sweepstakes. And his CD, "The Night Was Blue," is finally available for sale on CD Baby.
When I first picked up on this CD last year, Kurt had exactly one "live" performance under his belt. Since then he has done about a dozen gigs here in the L.A. area. I've attended every one of them, and and in each instance, he has come off like a seasoned pro. I fearlessly predict that 2008 will be HIS year.
Posted by Bill Reed at 8:47 AM No comments:

In the grand tradition of Ray Charles and Betty Carter, Melodye, and Jack Sheldon lend their personal stamp to this holiday favorite, Baby It's Cold Outside. From Melodye's best-selling CD, Noctural Velvet.
(courtesy of Melodye)
Posted by Bill Reed at 9:54 AM No comments:

"White Christmas"
Posted by Bill Reed at 8:43 AM No comments:

The BESTEST Christmas CD Ever? 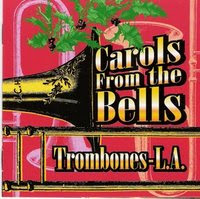 ___________
Far superior to "I Wanna Spend Christmas With Elvis," easily more memorable than "Twimmin' the Cwis'mas Twee," yes, even better 'n "Christmas Done Got Funky"! I refer to the brand new CD, "Carols from the Bells," a musical Yuletide present from "The Hearts of Music Fund," an L.A. non-profit fund established to assist musicians with emergency medical needs.
The recording, just released, was arranged and conducted in the Fall of 2007 by L.A. "First Call" trombonist, Bill Reichenbach. (He of the Fabulous Flying Reichenbachs.) The assemblage is known as Trombones-L.A.
Consisting of the playing of 22 (sometimes all at once!) of Hollywood's finest bonistes applying their talents and instruments of various permutations (tenor, bass, contra bass) to 25 tracks, consisting of a wide range of seasonal repertoire, Christmas music just doesn't get any better than this.
The repertoire ranges from the traditional, in some instances like you've never heard before---as in the case of this "Jingle Bells" --- to what is believed to be the only recording of the Hugo Friedhofer Main Title from the holiday classic, "The Bishop's Wife."
You can order it from---proceeds go to Hearts of Music--- Hearts of Music, 2751 Westshire Drive, Hollywood, CA 90068. $18 P&H included. For quantity prices and shipping, email: HeartsOfMusicOrg@aol.com
For a good cause, a musical bargain at thrice the price, and great to listen to any time of the year!

The final days, I tell you

____________________
Unlike as of yore when the Grammys partook of at least a degree of reflexive obeisance to actual grown-up music, those days are now apparently gone forever.
This year's Grammy nominations have just been announced and all the major categories consist of nothing but kid music(?) junk. Not even the bearable likes of a Steely Dan or James Taylor. And as for the jazz vocal category? Yawnsville!
A dark day for the few still-living and now gone-on founders of this once if not exactly noble institution, at least well-intentioned one.
The argument goes that these awards just reflect that to which the vox populi ("great unwashed" is more like it) is listening. Well if that's the case, then they should just close NARAS down, for it's only making an already bad situation worse.
Jazz pianist John Wood (son of Randy Wood, founder of Dot Records) sums up the problem quite succinctly in this excerpt from the liner notes to his CD "Drum Machines Have No Soul, v2":
"Did you ever see Elvis or the Beatles waiting for someone to tear open an envelope and say, 'And the winner is. . .?' Sorry, folks, it never happened. It never could have happened. Music suceeded on its own merit. It was about individualism and independence of thinking. It was about freedom. Had those artists gone on national television every 12 months and had their arms filled with trophies and then gone to a Pepsi commercial, they would have been neutered on the spot. They would have become a property of the state, the party or the corporation. No longer would they have been forces for social revolution, which they were."
So the story goes, the great Jack Paar once met Phil Donohue and told him how disappointed he was that the latter's talk show had increasingly taken the low road in terms of subject matter. Donohue equivocated that that was the price he had to pay to stay on the air. Jack retorted, "Well, a gentlemaan would have quit." Applicable here, I think. To reiterate, maybe it's time to close down the dump known as NARAS. "Sciences" maybe, but "Arts"?, forget it!
Now I must close, go to the garage and affix to old Bessie my "No More Music Award Shows" bumper sticker from John Wood's Society For the Rehumanization of American Music.
Whatever happened to standards? And I don't mean the Great American Songbook kind.
Posted by Bill Reed at 10:11 AM 3 comments: 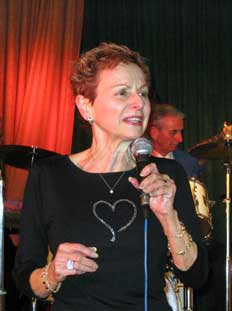 Kuro and his evil twin 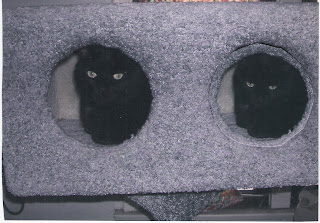 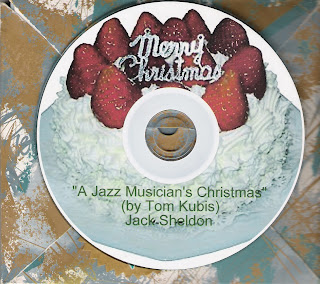 Bummerrrrr
More where that from.
Posted by Bill Reed at 6:29 PM No comments:

Kuro in his new winter quarters 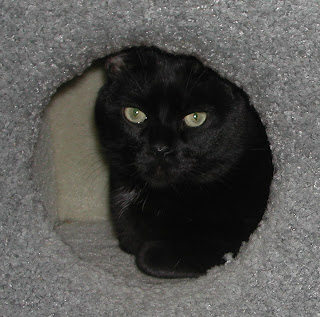 Track three - "The Worstest Christmas Ever" 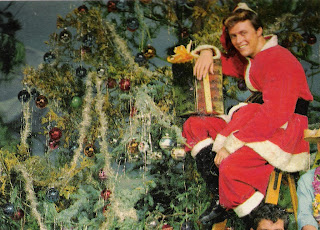 Track two - "The Worstest Christmas Ever" 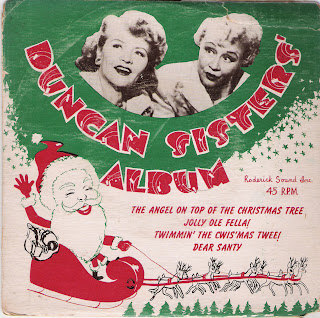 HEAR
Posted by Bill Reed at 9:56 AM No comments: