Here are two rare Beverly Kenney tracks that, to the best of my knowledge, have never appeared on CD. I wish I'd had the presence of mind to include them on SSJ Records' brand new Kenney release, Lonely and Blue, on which I acted as release producer. In the immortal words of Jane Powell, Too Late Now. Oh well, here they are---for a limited time---and for free! _______________________ 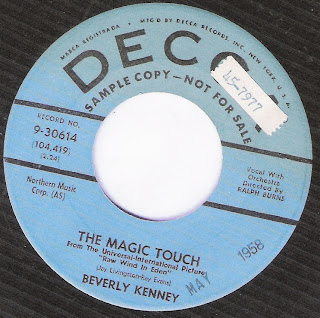 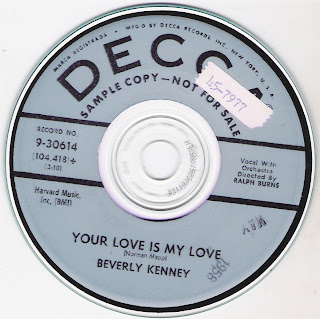 Read about The Cunninghams
Posted by Bill Reed at 2:20 PM No comments: 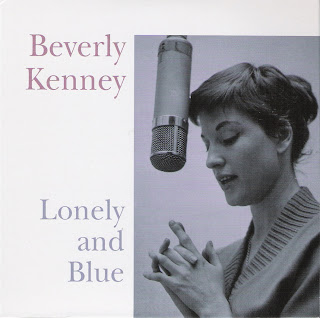 A phone call from Carole Creveling!

After nearly a year of trying to track down jazz singer Carole Creveling (see previous post) I finally found her. Like me dear departed grandma woulda said, If she'da been a snake she'da bit me. For more details:

Yours truly,
Mister Trace, Keener of Lost Jazzettes
Posted by Bill Reed at 3:08 AM 2 comments:

Today is the birthday of noted American songwriter / singer-pianist Willard Robison (1894-1968). Nearly as much a mystery to me as "Who is Carole Creveling" is how she came to record such a relatively obscure and rarified repertoire as on her lone LP (now CD). This is typified by one of the few recordings ever of Robison's (with Ray Mayer) "Now We Know." Creveling's '55 recording contains songs that are still a bit recherche a half-century later, i.e. Rodgers and Harts' "You Have Cast Your Shadow on the Sea" and Berlin's "Better Luck Next Time" fr'example. Also included are TWO songs written by Milt Raskin who, I'm convinced, produced (uncredited) the album. But even a phone call to his physicist son, living in the midwest, was ultimately of no use in verifying this. But I obsessively digress. In tribute to Willard Robison. . . Hereeeeee's Carole!
Posted by Bill Reed at 8:53 AM 1 comment:

Last night , songwriter-pianist-comic-social commentator-bon vivant-master parodist-Einstein lookalike Ray Jessel recorded his forthcoming (second) CD, "The Next Seventy Years" at L.A.'s Steinway Hall. I first heard Ray a couple of years ago. As such, I am probably the last on my block to get hip to him. He made me laugh then and he made me do so even louder last night. As an alien from the planet of the goyim, where we neither scream at one another or hug, it's not easy to get me to guffaw out loud, but Jessel can do it. He is a terrific entertainer.

One of his new songs is a lament about lost love for a "girl" who has panache, style, flair etc. but, alas, something, um, extra that's not usually found in persons of that gender. In other words, technically she is a he. Not that there's anything wrong with that. Not since the great Abe Burrows' "Girl With the Three Blue Eyes," "Boulder Dam"and "Upper Peabody," etc.

Something of a novice at performing, 77-year-old Jessel only began doing his act about five years ago. That might explain why he has not quite been elevated to the status of national treasure. . .yet. But he is no stranger to writing for the stage and TV. Here is a bio and list of some of his credits. They stretch back to at least 1960 when he wrote and co-wrote the following two songs for the legendary Julius Monk's revue "Dressed to the Nines": Nanny and Unexpurgated Version (with Marian Grudeff). Performers include Ceil Cabot (Nanny) and Gerry Matthews, Pat Ruhl and Gordon Connell.
Posted by Bill Reed at 12:46 PM No comments:

Cole Porter as you've never heard him before.
Hear here
Posted by Bill Reed at 8:55 AM No comments: 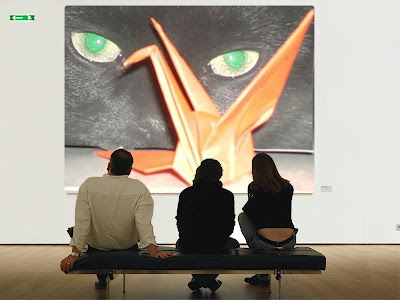 I hate to come off like Mrs. Grover Cleveland here, but some of the Kennedy honorees of the past few years make me wonder whether there shouldn't be at least a degree of attention paid to the private, extra-artistic lives led by some of the recipients. In other words, whatever happened to standards and personal accountability?

Previous winner Chuck Berry, a personal favorite of mine otherwise, has been arrested and charged for crimes against other human beings, some of which are so foul that I wouldn't want to sully the fragrant blogophere air by invoking them here. The late James Brown (is he buried yet?) also was not exactly a good burgher. And, in my opinion. Smokey Robinson simply isn't all he's cracked up to be. But that's another issue entirely.

Next to these characters it seems to me that even Ms. Diana Ross, one of this year's honorees announced yesterday (her insane contractual riders and recent detox escapades aside) is a veritable artistic giant and model citizen by comparison. Her last year's "I Love You" CD was her best post-Supremes work IMHO. In other words, I don't have a problem with Ross being accorded Kennedy honors, nor with any of the others singled out this year. Along with Diana Ross, a couple of the other honorees have their fair share of personal problems. But nothing that even comes close to the outwardly-directed evil agression of the likes of Berry and Brown. The next thing you know they'll be giving the Nobel Prize to Berry for his pioneering work in the area of the P** Cam.

Viz-a-viz Tony Bennett's smash engagement at Radio City Music Hall last weekend, I just finished reading The Good Life, his 1999 autobio, written in conjunction with Will Friedwald. One of the best entertainment bios I've read in a while. A real nuts-and-bolts look at the world Bennett came up in. Very few punches pulled, including at least passing references to mob fealty and Bennett's one-time substance abuse problem (without wallowing in it).

Somehow I have just always assumed that Bennett's stint in WWII was spent in one special services unit or another. And while he did conclude his stay in the armed forces in just such an outfit, there were---I learned from the autobio---at least four months spent on the front lines with bombs going off all around him and comrades getting blown away right and left. A perfect prelude to five or so years getting a post-war start in show biz, which Mort Sahl once pointed out is the only animal that eats its young. Someday I would love to just shake Tony Bennett's hand. . .if I live long enough.
Posted by Bill Reed at 4:56 PM No comments: 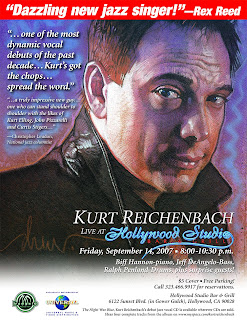 _________________
Kurt's in-person appearance last year at Herb Alpert's Vibrato was his first ever as a singer (he's been known to do stand-up). Then, recently, two more at Hollywood's Gardenia. And last month, for the first time, at the Hollywood Bar and Grill, located at Sunset and Gower in L.A., where he did such a bang-up job that he was invited back almost immediately. That'll be this coming Friday.
Already, Kurt looks like he's been doing this sort of thing for years (probably his training as an actor). "Live," he comes out, hits the ground running and does all the things that all good singers should do. Sings consistently in tune, packs a class repertoire, works with only the finest musicians and, yes, Virginia, there is such a thing as swing, I can prove it and Kurt does it non-stop. Even on snails-pace ballads.
This Friday at HSB&G he'll be doing songs from his debut CD, The Night Was Blue, along with selections from his forthcoming "live" CD, With a Song in My Heart. You can hear some full-length samples from the former at http://www.myspace.com/kurtreichenbach.
Posted by Bill Reed at 7:49 AM No comments: 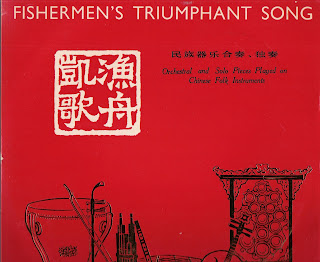 Rummaging through a desk drawer. . .

. . .I happened upon a handful of old snow. And this! My original English language manuscript for an article that was published in Japanese in the June 2002 issue of Record Collectors' Magazine (Japan)

_______________________
JOEL DORN by Bill Reed
Born in Philadelphia, PA in 1942, when he was twenty-one Joel Dorn became a disc jockey in that city. A few years later, as the result of a ten-year letter writing campaign to Atlantic Records executive, Nesuhi Ertegun, he was hired as a record producer at the label. Over the past 35 years, first for that company and later for a number of labels, he has overseen the making of a staggering number of albums; by rough estimate, around 300. The forward-looking Dorn has never even bothered to keep track of such mundane things as facts and figures. Over the past three decades he has proved adept not just in the field of jazz recording, but rock, gospel, pop, folk, rhythm and blues, and all the multiple fusions and variations therein. He has at least a few inarguable classic recordings under his belt as the result of collaborating in the studio with the likes of Roberta Flack (his discovery), Eddie Harris, Les McCann, Mose Allison, Bette Midler, the Modern Jazz Quartet, Marion Williams, Ray Bryant, Les McCann, Leon Redbone, Sonny Stitt and approximately 130 other groups and solo artists. At the present time he is producer of choice for popular jazz vocalist Jane Monheit. So vast are his contributions, I decided to concentrate on three artists with whom he has worked: Rahsaan Roland Kirk, an enthusiasm of my editor here at Record Collectors’; the Neville Brothers, a personal favorite of Dorn‘s; and Little Jimmy Scott, a performer for whom I possess not only a great deal of affection but also, like several of my friends, a good deal of curiosity.
The prospect of interviewing and subsequently writing an article about Joel Dorn for “Record Collectors‘” ahead of me, I began to try and figure out how to best avoid going over the top with adjectives, i. e. the “best,” “most,” “greatest,” “legendary” etc. For no one is more likely to bring this weakness out in any writer than this---there’s no getting around it---legendary music industry figure. Thus I decided to present my talk with him, which took place in New York City in early December 2001, as a question-and-answer session and let the facts---and Dorn----speak for themselves.
. . .continued Here
Posted by Bill Reed at 8:54 AM No comments: