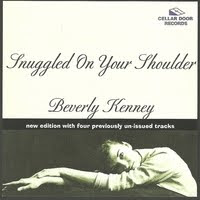 By: Bill REED
To the best of my knowledge, little has been written about the life of the late jazz singer Beverly Kenney. Only Jonathan Schwartz's article in the November 1992 issue of GQ came anywhere close to being comprehensive, and even that left a lot of questions unanswered. Most obviously, still dangling with a big question mark over it, is the cause of her suicide in 1960 when she was, if not THE Girl of the Year, at least A Girl of the Year.

And so I set out to see if I couldn't overturn a few more stones regarding the suicide of a woman still in her twenties who seemingly had, if not everything, at least a lot to live for. In the end, however, I'm afraid I didn't come much closer to solving the riddle of her self-willed death than Jonathan Schwartz did.

One thing I did come to sense, though, from talking to a number of friends and professional associates, was that Kenney never really had a chance. The only dissenting voice, in that regard, is one of her closest friends, actress Millie Perkins, who contends that she NEVER saw it coming. Which, finally, makes Kenney's suicide all that much more paradoxical and puzzling.

Circa the late fifties, singer Beverly Kenney seemed to have everything going for her. A fast-rising performer in the still-dominant, pre-Beatles world of commercial jazz, she seemed poised to reap the same kind of rewards and accolades that had recently befallen a slightly older wave of singers, i.e. Chris Connor, June Christy, Julie London, et. al. Indeed, the latter in a '57 interview, cited Kenney, along with Peggy Lee and Ella Fitzgerald, as one of her favorite singers. "Looks to me that 1957 will really be her year," London said in an interview. "I dig her because, well, she phrases like mad. She sings in tune, too; matter of fact, she sings like a musician."

Kenney possessed looks to rival those of pin-up chanteuse London. As for her singing style, try to imagine what Billie Holiday, with an equally slight, laid-back timbre, might have sounded had she been born a generation later and come up listening not so much to earlier jazz greats like Teddy Wilson and Louis Armstrong but instead to cool school players like Mulligan, Tristano, and Getz, et al.

Julie London's encomia followed hard on the heels of two years' worth of equally effusive praise in the pages of Down Beat and other influential music and show biz publications of the period: "It looks as if finally, a new voice of unmistakable jazz quality has appeared to take its place beside those of Sarah Vaughan, Billie Holiday and Ella Fitzgerald". . ."a great jazz vocal find". . . "Beverly is beginning to arrive and she is displaying the kind of ability and potential that should enable her to stay a long time." In light of how Kenney's life and career played out in 1960, the latter quote was especially ironic. Beverly Kenney wasn't all that much older than I; thus, it was difficult for me, as a teenager, to comprehend her suicide.  MORE

i knew bev kelly but i didn't even know beverly kenney existed -or sang , and sang so well, and so delicately.

thanks for the story, i's ever so moving, and it does fill in SOME of the gaps

Rounded up all her LPs.
She was magnificent.