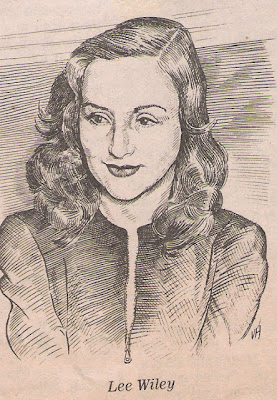 __________________________
HERE IS A CLIP from an award-winning 45-minute 2002 Japanese TV documentary in which Japanese actress-singer Nobuko Miyamoto goes in search of "her" Lee Wiley. Translated narration spoken by Bill Reed (i.e., Me!). One of the participants in the docu, Gus Kuhlman, talked about the making of the film in an online oral history.

"Lee Wiley came down. I met her, and we became friends. And I always made---there was a lot of interest in---I wrote a small book about it. One time I got a call from a producer in Japan who said that they wanted to do a documentary on Lee Wiley. I'll try to shorten the story. Her picture up there. That's the Japanese actress who was an award-winning actress in Japan, who was going to be the main one who was acting in this. What happened was her husband was a director [Juzo Itami of "Tampopo" fame]. One day he threw himself out of a six-story window, out of his office, and killed himself. And she went into a terrible state, and she wasn't doing any movies or doing anything. And she heard Lee Wiley's song--she was singing, And she just fell in love with this, and she liked that, and she heard more of her. She tried to learn more about Lee Wiley, and she couldn't learn anything. So they went on the Internet and asked for anyone who could give her help on Lee Wiley. And they got no answer. They were just about to withdraw and give up the idea when they got an e-mail from Barbara Lea. She's a singer here who is currently singing in New York City and is another good friend of mine. And she said, "Get a hold of Gus Kuhlman if you want to know more about Lee Wiley." So they did. They contacted me, and that did it. From that point on they were able to make the movie. So she didn't impersonate Lee Wiley. It was called 'My Lee Wiley', and she just wanted to learn more about her singing and everything. So part of it was filmed here right in this room and outside. They did a heck of a job. It was named Documentary of the Year in Japan in 2002. So it was a lot of fun to do. No script or anything. It was just off-the-cuff stuff. It was very nice. I have some pictures upstairs of that, too, when they were filming here. And they had sent us some VCR's of her earlier films that she had done before this. So we got to know who she was, too. We still correspond."

Thanks to Jeremy Cavaterra and Kurt Reichenbach
Posted by Bill Reed at 10:30 AM

HI mi friend really loved Lee Wiley do you know if exist a film from her or and interview of lee wiley she said in the library of the congres in Washington DC exist one for 9 minutes but what you knw about it?