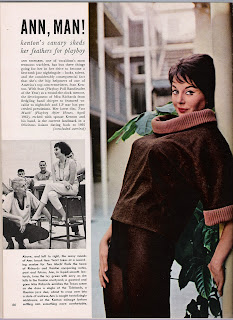 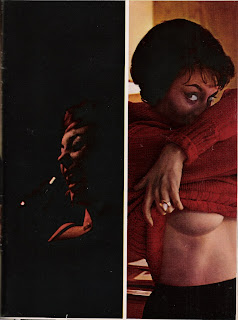 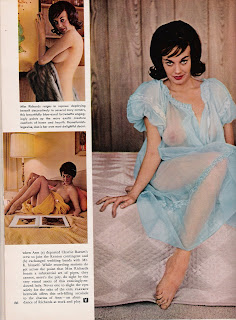 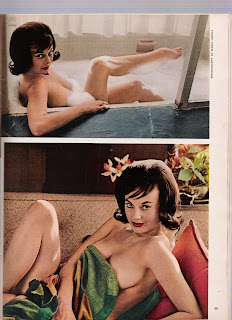 I LPVE her suit in the first picture. She looks great!

Ann Richards is for me really one of the most underrated jazzvocalists ever...She's one of the few singers whose albums I all have, and consider them as equal strong...For me she's also one of those singers about who you don't have think wether she's a jazzsinger or not...She is, in every aspect!
She phrased like a horn, had musical strong ideas and could scat up a storm, just like Fitzgerald, O'Day and Carter...Btw she was probably the only white singer, besides O'Day in the fifties and early sixties who scatted like that...

I think it's a pity or better, a shame, that she recorded only just once after this shoot...

Maybe there is some unissued material?
I truly hope so...

Makes me sad, thinking about how she ended her life, probably forgotten by the ones who once loved and admired her...

What's all the brouhaha about? She's got great tits and looks like a million dollars. Herb Albert was featuring a gal dressed in whip cream about the same time on an LP of his. Provocative girlie covers were used on countless jazz albums. Was Kenton a prude? What's all that about friend's not showing friends a Playboy magazine. If I had a friend and I was touring with Ann at the time, I would have given my friend hell if he DIDN'T show me the magazine.

Thanks for posting the pics. Always wanted to know what the bru-haa-haa was about. What a tragedy. And Kenton's hypocrisy. If your friends with Heffner and read the mag, be prepared to accept people might be seeing your wife or daughter between the pages.

Times have changed. Now being a girlfriend of Hef is a positive bullet point on a resume.

In the late 60's, after grad school at UCLA, Ann gave me a beautiful, chrome-plated EGG-shaped cigarette lighter that graced the glass coffee table in her home. It was exquisitely crafted and polished in spun metal-- which by, coincidence, was the same technology used by my mentor, Jeffrey Lindsay,the inventor-designer of geodesic fame (under Bucky). He had recently used the esoterica of spun metal to render the epoxy plug-shape for making scaled-down presentation models of Atmospheres--a hi-tech spherical-based housing concept he had recently invented. He explained the process of metal spinning to me, and, intrigued with the tech, I then designed an award-winning, large-diameter spun metal furniture "piece" temporarily sold by Knoll Int'l (in 1970, I think)--the design inspired by Apollo lunar mission imagery and,unarguably, Ann's generous gift--the egg!

Thank you, Ann. You helped launch my design and mfg. career.

I'll never forget your friendship and how lovely and talented you were. Thank you again. GN