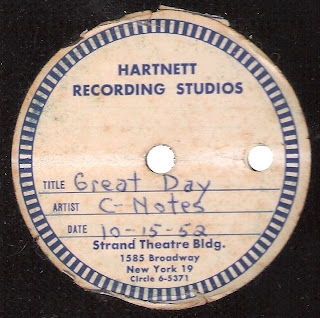 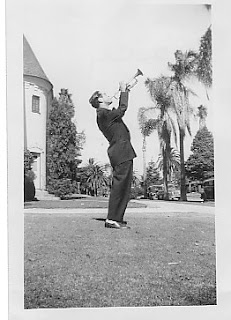 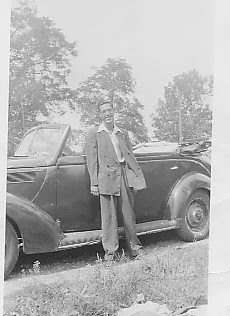 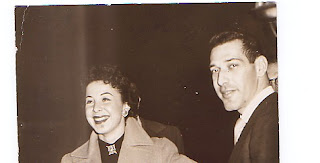 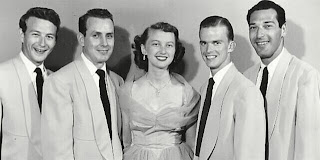 ______________
Top to bottom: 78 rpm acetate label, Mort Hillman as a young man with a horn, on the road, Mort with Eydie Gorme, C-Notes clipping, promotional photo of The C-Notes.
_______________
I produce reissues for the Japanese record label, SSJ. One album that I licensed recently, from 1955, has a highly interesting story behind it, especially when it came to its producer, Mort Hillman. I tracked him down living in retirement in Florida. "Retirement" from a long and interesting professional life in which he wore a number of disparate "hats."
He started out as a trumpet player in 1947 with the Tommy Dorsey band, and ended up in 1980 as a NY State assemblyman. In between those two temporal poles, among other things, he sang in a highly-active and forward-thinking vocal group (The C-Notes), owned a record label in Chicago, and was an exec with Jubilee, Audio Fidelity and Music Minus One Records. (Today, Mort remains active in Democratic Party politics in Florida.)
The other day he sent me some acetates of The C-Notes and I was highly impressed by what was in the grooves. Or should I say what little music remained on these 1952 78 rpm recordings. For acetates were usually made for audition purposes and were expected to be played only a couple of times. After that, the grooves became increasingly distressed with each additional spin. Clearly the acetates Mort sent me have been played many many times. And then, some of what little that managed to survive had evaporated off into the ether. Nevertheless, from listening to what remains, one can still get a sense of just how good these four guys + one gal were.
This particular vocal group "sound," as exemplified by The C-Notes, was clearly in the air that season and is a pluperfect example of what the fabulous 40s outfit, The Merry Macs, along with Kay Thompson, hath wrought. The recordings also demonstrate just how full the woods were, in those times, of wonderful talented musicians and of the great music they made. Even though they never broke through to the big time, The C-Notes were just about as good as anyone else around at the time. And there were probably hundreds, if not in fact thousands of other semi-annonymous traveling and strolling musical players who were just as talented as the members of The C-Notes.
Not having a turntable (I never leave home without mine), much less one that spins at 78, Mort had not heard these sides for many years, and so a few nights ago---just like being back in junior high school---I played one of the tracks to him over the phone, and he simply could not believe how good the group was. He was as knocked out as I was. And he couldn't even recall recording the track!
The C-Notes did commercially record. I have found a couple of tracks on Columbia, but there might be more. Mort cannot recall. I also unearthed a 45 rpm of two sides that The C-Notes recorded with the very fine singer Dolly Dawn, but Mort had no recollection of these either until I also played them for him over the phone: "Oh god, yes, now I remember. Of course!" He also was in the vocal outit that backed Eydie Gorme on her very first recording, "Tea for Two."
Coming across someone like Mort Hillman, for me, is like dying and going to heaven.
***
Listen to The C-Notes singing "Great Day." (Please note that at the present time one can only download this track from Box.net, but not stream (i.e. play) it.
(Thanks to Busterooni for helping make the sound on "Great Day" a little better.)
Posted by Bill Reed at 8:56 AM

I work with Jane from the C-notes! Thanks for sharing your thoughts... and the download!

Morton C. Hillman, a veteran of the music industry and former member of the New York State Assembly passed away peacefully February 3, 2014, in Delray Beach, Florida.

Born in 1926, he grew up in Norwood and Cincinnati, Ohio. As a musician playing cornet and trumpet, he served in the USO during World War Two. He later became a member of the Tommy Dorsey Orchestra as a trumpet player. His vocal group, the “C-notes” made an appearance on the “Arthur Godfrey” show, placing second to Steve and Eydie Gormé. As advertising director of “Record World Magazine” he was known throughout the music and entertainment industry.

Settling in the Beechhurst/Whitestone section of Queens, NY, in the early 1960’s, he continued his activities as a community leader and activist. In 1986, he was elected to the New York State Assembly to serve three terms for the 26th Assembly District, and later was appointed to the Bi-State Commission on Long Island Sound.


In lieu of flowers, memorial donations in his honor can be made to the Jewish War Veterans, The American Diabetes Association or the National Breast Cancer Foundation.