And MORE! from SSJ in October 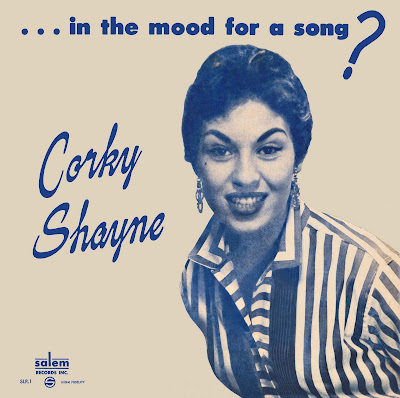 ________________
Abridged liner notes for SSJ Records' October release of Corky Shayne's In the Mood for a Song?:
Getting in touch with the rightful owner of the master of this album, veteran music executive Mort Hillman, was easy enough. And after negotiations were completed for SSJ’s release of the 1956 LP, next came the task of securing some background on the making of the disc. But so far back in time did Hillman oversee the production of the recording---more than fifty years ago ---that he can only remember a few scant details about the artist, Corky Shayne.
Hillman can recall doing a record promo tour with Shayne, including appearances by Shayne on popular radio shows in the Chicago area such as those of popular dee-jays Howard Miller and Marty Faye. But that was just about it,
And were it not for the help of legendary Chicago singer-pianist Audrey Morris who did, in fact, recall Shayne from the golden era of the Fifties music scene in Chicago, I might never have ascertained the few facts about the singer that I finally did. In late 2008, the still professionally active Morris put me in touch with Shayne’s half-sister, Ava Schneider, who was able to supply me with a few facts about Shayne. From Schneider I learned that Corky (real name Corinne) was born in 1932 in Illinois and that she died in Indian Wells, California in 2005.
Schneider recalls that her sister didn’t remain in Chicago too much longer after her performing activities ceased, and that Shayne then moved to the Los Angeles area where she remained active in show business, but behind the scenes with a series of jobs as assistant to music industry executives. I did, however, find an L.A. Times reference to her performing at a 1965 charity event. Shayne’s half-sister also said that somewhere along the line, Corky became an avid golfer and eventually moved to Palm Springs, California area where she could actively pursue her growing interest in the sport. Clearly, if she was half as good a golfer as she was a singer, then Shayne must’ve had more than her share of holes in one.
A longer version of these notes can be found here.
1. IF I ONLY HAD A BRAIN
2. HE'S JUST MY BILL
3. MY LOVE IS A WANDERER
4. BACK IN YOUR OWN BACK YARD
5. NOW MORE THAN EVER
6. EV'RY TIME
7. AUTUMN IN NEW YORK
8. JUST SQUEEZE ME
9. I'M GLAD THERE IS YOU
10. TEARDROPS
11. I HEAR A RHAPSODY
12. TWO SLEEPY PEOPLE
Posted by Bill Reed at 4:05 PM