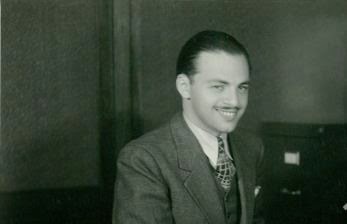 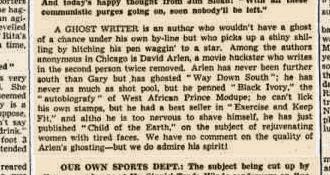 Every year or two I'll start a-googlin' away trying to figure out who the hell---exactly---IS David Arlen who co-wrote the painfully/sinfully/unforgivably out-of-print Clarence Muse 1932 roman a clef, Way Down South. About the latter's experiences on the historic Black T.O.B.A. vaude circuit. I really had to dig reallll  hard today, but finally came up with enough to, at least, temporarily whet my informational appetite re: Arlen. Everyone knows Muse. Right?! If I'd used the search words "publicist" or "ghost writer" I'd have lucked out much sooner. Arlen was born in 1906 and died in '92. The clipping is from 1951. Nice lookin' dude.
Posted by Bill Reed at 12:35 PM