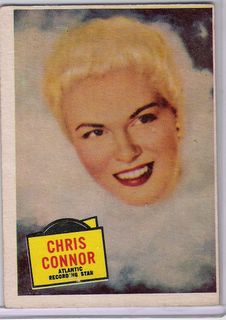 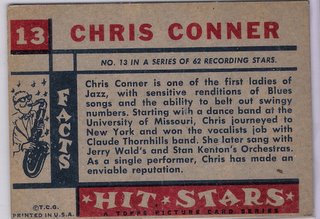 
Topps Bubblegum Card circa '56
I was very young, and modern jazz was just reaching mass popularity when rock came in a swept it all away. Prior to then, the arrival of a new LP by such as Dave Brubeck, June Christy, George Shearing et al. was a fairly big deal with record buyers. This was certainly true of singer Chris Connor. Most jazz critics didn't like her, though, complaining of her "flatness," "bad pitch," "horrible intonation," etc. (I hasten to add that history has since absolved her.)

Indeed, her pitch is odd. But she's totally in control and knows exactly what she's doing: If she's singing some series of notes not in the original melody, she's she still manages to reflect the original melodic sense of the song. Then for a moment she'll hop back on the melody as written, only to jump back off again a couple of bars later. But there's no faltering, and she always lands on her feet. It's a very tricky thing that she does. The operative description for Chris Connor in the early stage of her career was "far out," and it still holds true to some degree today. Critics who try to compare her to Anita O'Day and June Christy are missing the boat entirely. I'll "buy" the husky voice part; beyond that, though, she comes off like no one singing has EVER sounded.

Listening to her is as intellectually stimulating as trying to crack the Sunday New York Times crossword puzzle. If you follow her harmonic and rhythmic logic all the way through a song to the end, often, by the time you get there, you're worn out. But it's a good kind of tired. This holds true as much for the ballads as the flagwavers. She lags behind the beat, then rushes ahead. And you can hear her musicians trying to keep up with her tempo-wise, slowing down, speeding up. This rhythmic tension between singer and players is a great part of the appeal. I saw her in a rehearsal session once; she’s a tough task mistress.
Posted by Bill Reed at 9:38 AM