Dr Chilledair and The Case of the Phantom Singer 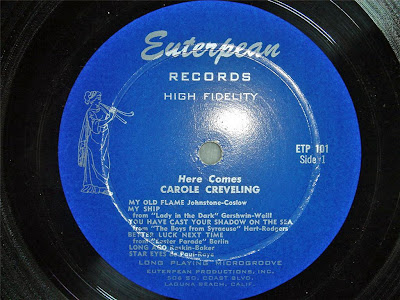 In recent months, fifties jazz singer Carole Creveling has become an obsession for me; a “Rosebud“; a conundrum wrapped in a riddle. A post-bop Dark Lady of the Sonnets, if you will. (See my previous on-the-track-of CC picture post.) Let me explain.
In December 2006 I gave a talk before the Tokyo Vocal Jazz Appreciation Society dealing with the subject of (for the most part) perfectly fine U.S. jazz and jazz-oriented singers who cut one album (circa 1955-1965) and then more-or-less fell through the cracks of phonographic history never to be heard from again. The complicating factor being, of course, the tsunami of rock and roll that, beginning in the mid-1950s, roared across the landscape of popular music sweeping away almost everything non-rock in its path. The “victims” included some 265 (and still counting) singers that I have thus far isolated on my master list of “One Shot Wonders,” the title---by the way---of my TVJAS presentation. (And thanks to Mister Frederick Stack of Boston, Mass.)
If my list were not strictly alphabetical, there’s no question that Carole Creveling would be at the very top. If not by dint of talent (although she’s quite good), then by virtue of the relatively large sums of money that her lone LP, Here Comes Carole Creveling!, from 1956, have fetched in recent times on the collectors’ market. Even for copies that appear as though they might have been run over by a Mack truck and then left out in the sun all day for thermal reconfiguration. The album jacket bore the legend “Volume One,” implying that a sequel was forthcoming. But there was never, to the best of my knowledge, a volume two. If there was, I'd love to have a copy, not only for its intrinsic musical value, but also for the nice addition to my retirement fund its eventual sale would unquestionably provide.
Even if Carole Creveling but dipped her toe in the waters of show biz (did she ever appear “live” anywhere?), decided that it wasn't for her after all, got married, moved to the midwest and taught high school music for the rest of her professional life?, still I am interested in her story. It can’t help but shed a bit more light on the subject of the jazz life of the late fifties and early sixties.
Carole Creveling would at least be in her mid-seventies today. I hope I can find her. Talk about falling below radar!
Posted by Bill Reed at 10:19 PM