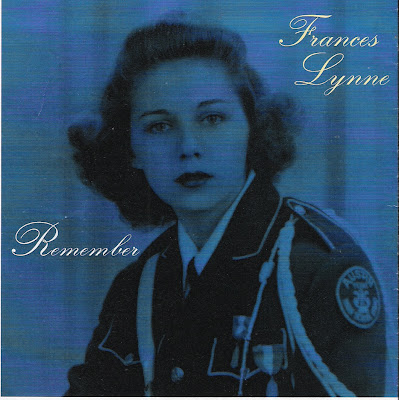 I've been almost entirely neglectful about posting here in recent days.The distraction has come about as a result of the work I do for the Japanese label, SSJ Records. Helping to release what amounts to only a couple of CDs a month doesn't seem like a lot of work, but -- trust me -- it is! And it's not only these releases I've been working on, but issues well into 2008. However, we've just about put the July releases to bed and so... now it can be told. Especially since word about the quintet of issues is already all over the place in cyber commerce-land. The brains behind the outfit is SSJ's owner, Mister Yasuo Sangu, formerly of the Concord Fujitsu Jazz Festival. I am but a mere minion. (beat) Over the next few days I'll write about what SSJ has coming out next:
Frances Lynne -- Remember. This is a fairly recent, and for all intents and purposes, previously-unreleased recording by Gene Krupa's last (1950) "girl singer." The album is produced and arranged by Mike Abene and spotlights the playing of such as the late Johnny Coles, Herbie Steward, John Handy, and Lynne's husband John Coppola. I was introduced to the Coppolas (AND this recording) when I was doing research on my SSJ release of Krupa singer, Bill Black.
Frances Lynne holds the dubious distinction of being the last female singer in the great Krupa band, which she joined for the last few months of its existence in 1949-50 season. Lynne was quite young at the time, but already was a seasoned professional having begun singing at age six on the radio in her hometown of Austin, Texas. She recalls, "My mentors wanted me to go in the direction of Deanna Durbin. I had this 'beautiful' voice that was very high and sweet. But then I fell in love with popular music and jazz."
During WWII Lynne was a vocalist in 156th Army Band, and also toured with the USO. Arriving in San Francisco, California in 1946 after the war, her first serious affiliation was with a small group, The Three D's," whose pianist was none other than Dave Brubeck. Their musical "home" was the now-legendary Geary Cellar in SF. When Paul Desmond joined the group, it became even more popular. "We worked jobs all up and down the peninsula," says Lynne. Next stop for the singer was the Charlie Barnet band. Following that, Lynne went with Jerry Wald and then, finally, Krupa, where she sang alongside Bill Black, whose Down in the Depths was one of SSJ's first releases, in 2005.
It was in the late 40s that Lynne met her husband, trumpet star with Woody Herman, John Coppola. They married in 1952. After that, she began to wind down her music career, although she still continued to work occasionally, including singing with Alvino Rey's orchestra. But homelife and marriage finally took precedence over music and Lynne more or less retired.
But in the early 90s, Lynne felt she still had more songs to sing (such as th rarified likes of "The Touch of Your Hand," "Blue Prelude," and "Can I Forget You?"). And with the terrific Mike Abene arranging and producing, and a band of who's-who musicians behind her, including John Coppola, Herb Steward, John Handy, and Johnny Coles, Lynne recorded Remember, the liner notes for which were co-written by her band mate of nearly fifty years earlier, Dave Brubeck. Remember had only very limited distribution. It is a testament to the vision (and ears) of Sangu San, that this is finally being released to gain the wider exposure it so clearly deserves. He heard the recording initially when I played a couple of tracks from it at a meeting of the Tokyo Vocal Jazz Appreciation Society last December. His first words to me when I had finished my presentation were: "I want to release that." A far cry from the apathy shown by U.S. labels when they were approached to issue the album in the early 1990s.
Tomorrow: Bev Kelly: Live at the Jazz Safari
Posted by Bill Reed at 8:32 AM