A Guinness RECORD of sorts? 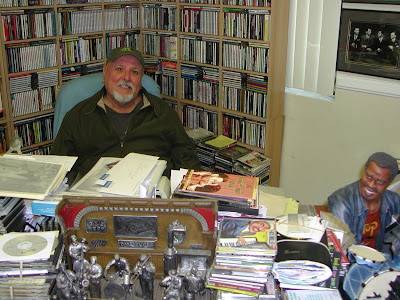 ______________________
I remark to my friend, music mini-mogul Wayne Knight,“In all likelihood you just might hold the record for the producer with the highest number of releases coupled with the lowest public profile.” He laughs, says that would look great on a business card, and then acknowledges that my observation just might be true.

Part of the reason for Knight's flying so far below radar is that he has seemingly never lifted so much as a finger to direct the spotlight toward himself. He can only recall one self-publicizing article that ever appeared in print, and that was in a local paper in Glendale, CA where he lives and works. Instead, his actions are mostly directed toward promotitng the music he loves and its purveyors, the majority of whom practice within the realm of---or else not far from---jazz.

Over the past three decades there have been literally hundreds of releases on the various labels Knights owns, including Giants of Jazz, Glendale, Sounds Great, etc. These consist of just about every name you might think of from The Golden Age of Jazz. Not bad for a man who got into the business mid-career after an extended period as an athletic coach in his native Canada. Recently I asked him to tell me a little about himself, and his also his great affection for singer-songwriter, Johnny Mercer.

"I was an athletic coach from the late 50s to the late 70s. I started my first company [in Canada] around 1973,My Way Records, which was a way of producing non-released Frank Sinatra material to help promote a book I was writing on him. This was the first time his V-Discs had been released. Also a very rare set of radio broadcasts. I got three issues out and that came to a halt when the Sinatra office got in touch with me and warned me to cease and desist. [One sometimes wonders, isn't it sufficient to just cease?].

My book consisted of chronologically logging his career from my readings, radio logs, interviews with people, various musicians who had worked with Sinatra. [Arranger] Heinie Beau let me use the diaries of his days with Tommy Dorsey.”

However, for reasons I didn't delve into, Knight's Sinatra book never came out.

"Although the word multi-tasking didn't exist at the time,”he says,“I was always a person who could do two or three things at one time. In the daytime I was coaching, at night I was playing drums in clubs, I wrote articles. and my mind was thinking about starting a record company, I finally fully retired from teaching and coaching in 1983. But there was an overlap between teaching and record production. In 1976 I came to Los Angeles to learn the record business and I eventually bought out Ray Avery’s partner in Legend Records.”

For those unfamiliar with Avery (September 28, 1920-November 17, 2002), in addition to his record label activity, Avery was a jazz photographer and record collector. He owned the popular Ray Avery's Rare Records in Glendale, California which became a mecca for jazz record collectors.

Prior to going into business with Avery, however, Knight had already got his feet wet the record world in 1976 with his Giants of Jazz label. “I had 42 releases out before I ever hooked up with Ray, then I merged those into his outfit when I bought into it. These were all basically reissue labels. Then in 1986 the two men dissolved the outfit and Knight started his current company.

"I think that every individual who is basically a reissue person wants to go into the studio and produce and that's what I eventually did with my own Star Line Productions in the 1980s. My first production was a [jazz pianist] Johnny Guarnieri thing, I did a bluegrass group called Mother Logo. Also projects with Dorothy Kirsten and Dennis Day. I also did hands-on reissue projects of their material with Bobby Troup and Mel Torme. And through producer Bill Wagner I met Page Cavanaugh and that’s how I came to produce him.

Eventually, though, you come to realise that of the two kinds of producing, reissue and studio, you have to have deep pockets for the latter. It takes a small company so much longer to get its money back.”

The subject I wanted to talk about with Knight, however, was not so much the nuts and bolts of the record business but rather his always-increasing fascination with songwriter-singer Johnny Mercer and, especially, the latter's “secret” life in the recording studio in the waning days of the latter's performing career.

NEXT: MOSTLY MERCER
Posted by Bill Reed at 11:00 AM