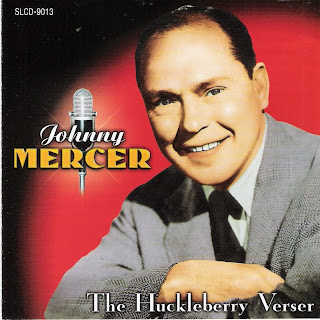 “I think that when the golden age of Hollywood musicals began to disappear,” Knight says, “Johnny Mercer started to feel like he was a figure that was lost in time, that people were beginning to forget about him. Not realizing that the legacy that he left of his wonderful lyrics and sometimes music, had left its mark in the American songbook and therefore he would never be forgotten.”

Part of the way that Mercer worked out his frustration with being a self-perceived troglodyte reminded me of something that the great photographer Roy DeCarava once told me; that he would go out with his camera and “take” pictures without film in his camera. Knight explains:

"Johnny was as much a singer in his own heart and mind as he was a composer-lyricist. And one of the things, because he could afford it at this time to indulge in for his own pleasure, was to contract an arranger to conscript a band. For a studio session and go in and record a whole album that wasn‘t ever meant to be released.”

One of these “secret” albums, one of which was recorded in the spring of 1972 when Mercer was 63, was eventually released by Knight in 1998 as The Huckleberry Verser. The arranger was Skip Martin.

HEAR TRACKS FROM, AND READ MORE ABOUT “THE HUCKLEBERRY VERSER”

Wayne recalls how he came into possession of the recording:

"In the early eighties I received a call from Ray Avery: ‘Hey, I got a call from [Johnny’s widow] Ginger Mercer, she has some recordings she thinks we might be interested in. I went. It looks very interesting. Maybe you can go with me next time.'

So we went out there and came back and the next day I looked to see what it was that I had hauled out of there. And there were all of these 12 inch 78 radio acetates that had been done for Johnny by Harry Smith in New York, a cutting house that a lot of bandleaders used for reference recordings.” And there was the material Knight eventually turned into “Verser.“

“I don’t think he really cared to farm it out to a label. Strictly self-pleasure. I feel reasonably certain that the Mercer studio album that I released was’t the only one he did. You have to remember that he lived in three places during this period. As much as he hated to fly, he did finally get the chance to record commercially once again in England for Pye in ‘74. He died two years later on July 25, 1976.

I acquired this material maybe twenty-five years ago, but it was perhaps ten years before I realized just how great a recording The Huckleberry Verser (Knight’s title) was. I wasn’t even sure how well it would do commercially. I soon found out . It did very well. Johnny does not get full credit as a singer, especially a very good rhythmic singer. Really a jazz singer, for many times he surrounded himself with great jazz music and he started his career during the jazz age. Late 20s, early
30s.”

“Verser” is not Knight‘s only Mercer record production. For the Collectors Choice label, for which he also produces, there is one, with a small jazz group. entitled Songsmith from Savannah.

Until the mid-1950s, when Mercer sold out his interest in the company, he had the perfect outlet for his activities as a singer. . .Capitol Records, which he’d co-founded in 1942 with two other partners, movie exec Buddy DeSylva, and record store owner Glenn Wallichs.

"He was into Capitol most definitely for his love of music and for the fun of discovering talent, and putting a lot of his friends on record. One of the first artists he signed for Capitol was Paul Whiteman who was one of the first persons to give him a break in the music business back in the early thirties.”

After Mercer sold his interest in Capitol in the mid-1950s, Knight says, “He really started getting the blues with the death knell of the Hollywood musical, but all of a sudden he was hooked up with Henry Mancini and won two Oscars back to back.”

Still that didn’t stave off the career blues forever. A plan to write a Broadway musical, says Knight, failed to come to pass because Mancini became to busy writing for the movies and TV. And a realized attempt at a musical with Andre Previn, Good Companions didn’t “fly” because Previn finally failed, according to Mercer, to devote his full attention to the project.

It’s unlikely that Knight would be working on the somewhat massive Mercer project that now occupies much of his time if the singer-songwriter had truly fallen through the cracks of time.

"The great irony is those artists who develop, like Mercer, a complex about being in the twilight years of their career and then they pass on and a resurgence occurs, which is definitely what’s happened with Johnny Mercer. Stage productions, documentaries, reissues from the Capitol records vault, and so on.

Knight’s newly reawakened enthusiam in Mercer came about as a result of reading two recent bios, Gene Lees’ and Philip Furia: “I thought, isn‘t it funny that I have all this material on Mercer, radio material primarily, that has not been shared with the world. I felt it would be really nice to do an overview of his career from the early thirties with Paul Whiteman right up until the early fifties. Mercer’s centenary is coming up next year. I would like to have it out by then. Now that I have all the material together I have to work out a concept.” Knight explains that this might take the form of one of several possible configurations but that it will consist of at least three or four discs. “If it is successful,” he adds, ‘I have much more material for a follow-up.”
Posted by Bill Reed at 4:30 PM