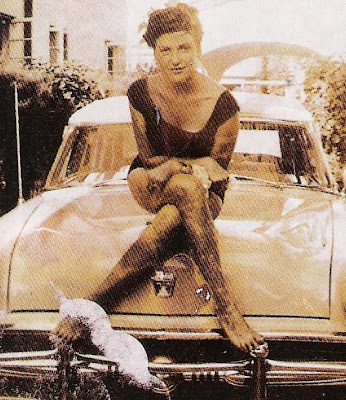 Great blog,Bill. I've learned much from you.

Beverly appears to be covered in mud or is that motor oil...? Do you what the story that goes with this pic ?

~ Beverly Kenney was born in Harrison, New Jersey on January 29, 1932, and began her professional singing career in Miami Beach in 1953. The following year she joined the Dorsey Brothers band, but only remained with them for a few months before going solo again. In 1955 alone she recorded three albums, accompanied by the likes of groups led by Ralph Burns, Johnny Smith and a small contingent from Basie band for the small but prestigious Roost label. And there were appearances in a number of top clubs, like Chicago's Mister Kelly's, and on major national TV shows such as Steve Allen's. In 1957 she signed with a major label, Decca. But by 1960, it was all over. Beset by changing mass tastes in music (Kenny once wrote a song entitled "I Hate Rock and Roll"), suffering money woes, and complicated by undiagnosed manic depression, on April 16th of that year she committed suicide. It is somehow fitting that the issue of this previously unreleased vocal-piano set, the first "new" material by Beverly Kenney in nearly half-a-century, should occur in Japan where critics and fans have long continued to revere and appreciate her. ~ Bill Reed