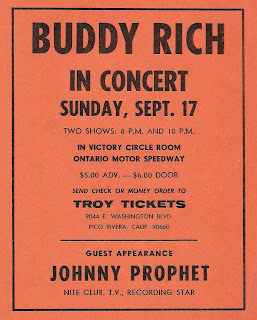 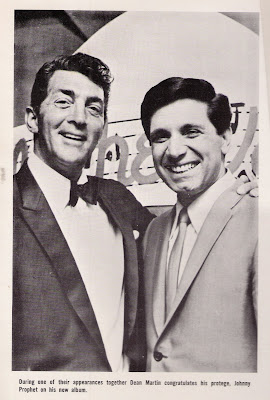 I have now contacted over 50 individuals, who should know, trying to track this guy down (it's Carole Creveling time all over again!), but no luck. You'd think with five LPs plus, and a (at least) 15 year nightclub career, including Vegas-Reno (Sands, Sahara, Harolds) and the Playboy Club circuit, somebody would know something.

It isn't just that they don't know what happened to him, most never even HEARD of him. There is next to nothing on the internet. His real name is John Profeta. He went to Monroe High School in Rochester, NY and graduated from there circa 1940. He also attended that city's famous Eastman School of Music where he studied trumpet. In the mid-forties he sang with the big band of famed violinist Joe Venuti, and also served in the army. Singer Kay Starr also sang with Venuti's band around the same time, but told me she'd never heard of Prophet.

I've owned and enjoyed Prophet's five (known) albums for years, but only recently became curious about him. I wish I hadn't done the latter.

Prophet was signed by Reprise in 1963. His LP with Axel Stordahl was released just prior to the sale of Reprise to Warners, then he was let go in the wake of the Warners deal. The "Harolds" album (see below) was clearly packaged and meant to be his second LP for Reprise but was not released by them. The Don Ralke, Gordon Jenkins and (the other) Ralph Carmichael albums were recorded and released over the next ten years on Prophet's little homegrown label to be sold in clubs. My sense is that the total cost in today's money of these "first cabin" LP outings is in excess of a hundred thousand dollars, pushing two hundred thou maybe. I have the session records (secured from the AFM) for the Ralke album, and the players are simply the best to be had, i.e. Earl Palmer, Plas Johnson, Lincoln Mayorga, Dennis Budimir, et al. My guess is that Prophet signed a five-record deal with Reprise which then paid for the recording of the other LPs after he was let go.


Here is a (partial?) discography:

This Is Johnny Prophet (released on Reprise, eventually re-released by Prophet) arranged by Axel Stordahl (1963)

"But I Loved Her," called "But I Loved You" on the Prophet album. His version was recorded approximately 11 years before the Sinatra rendition. Also on the LP Jenkin's "This is All I Ask".

I don't mind most of the above Carmichael tracks; they're only a little hokey. But the ones on the following Harolds LP are nearly unlistenable, although the singing is fine. Like a bad commercial Dean Martin album, who is described on the back of the album as Martin "protege" Prophet's discoverer. There's also a pic of them together in front of the Sands marquee.

At Harolds Club , Reno (recorded for Reprise, but released privately) 1963? Not a live album but packaged to look like one.

Also three Reprise Repertory Kiss Me Kate tracks (one with Dinah Shore); a radio transcription "The Navy Swings," with Al Viola!, and a single "How to Seduce a Woman," used on a movie soundtrack. Backing track recorded in London with sixty players, according to arranger Stu Phillips (nice guy).

In the early Sixties there was major buzz in the air about Prophet, no doubt because of his Reprise association, but that the big career predicted for him never materialized.

There is clearly a Sinatra connection here. In fact, Nancy Sinatra plays him on the radio and then asks listeners to tell her who he is, but no one has. There are also a few scattered 1950s singles, including one in 1952 arranged by Nelson Riddle on Coral. That's pre-Sinatra! Prophet also sang with Joe Venuti's band in 1945-46. There are three surviving airchecks of him singing with the that outfit: Laura, I'm Always Chasing Rainbows, Personalisty. If alive today, Prophet would be somewhere in his mid-eighties. The Social Security death index does not appear to list his passing.

Thirty years in fairly high profile showbiz, and vanished without a trace. I give up.
Posted by Bill Reed at 9:41 AM

THIS IS A GREAT BLOG ABOUT JOHNNY PROPHET (MY FATHER) ACCEPT TWO THINGS ! OUR REAL LAST NAME IS PROFETA . AND HE IS ONE OF THE MOST EXCITING PERFORMERS EVER !! AND A GREAT VOCALIST !

JOHNNY PROPHET IS A BRILLIANT ARTIST AND I APPRECIATE YOUR HONORING HIM !

YOU ARE GREAT BILL !

Last time I seen Johnny was at a market in San Pedro Ca. He's a delightful/cheery man who my mother constantly listened to and
sang along with on the phonograph while doing housework. Of course this was about thirty year ago.
His daughter was one of the most beautiful girls in SP, I think she went on to work with Telly Savalos in Hollywood!

What happen to Johnny?? Last time I saw him was at "GodMothers"

Mister Prophet lives in Palm Springs. And although I have the resources to reissue his wonderful recordings, he shows no interest in doing so. Bill Reed

I had the pleasure of knowing John for the last 5 years.
He is alive and well in the Palm Desert area. Still full of cheer and life. Always a please to see.

I have a copy of "This Is Johnny Prophet" on Little Ceaser's Records (LC-1001). Looks to pre-date the Reprise LP and has a different cover. Anyone heard of this release?

one of the greatest voices, ever!..in 1963, i was studying singing in nyc, with seth riggs.... & i was trying to go from pop/jazz singing in san francisco,where, after winning the "all army entertainment contest",i was discharged , & i started in clubs & musical comedy, & met bing crosby & frank sinatra.,..moved to nyc, met & worked with seth, the best singing teacher, for 5 years, hoping for a broadway/legit style/sound........ someone gave me a reprise album of johnny prophet, & i realized that this was the kind of sound/style i would like to achieve...nope!.... it never happened,..... but i "cherise" my recordings of mr. prophet....&... his daughter, melissa, is "indeed" a talent & a beauty in her own right...actress/producer/talent mgr....&.i hope to see & hear johnny , someday.....A RARE TALENT! best, & thanks to bill reed...JACK ENGLISH II (imdb)..west hollywood, calif..........

The album is very good...nice arrangements,
JP sounds a bit like Mel Torme.

Johnny Prophet - This is My Life
http://johnnyprophet.notlong.com/

Johnny Prophet is from or was living in the San Pedro, CA. area in the
60's and 70's...has 3 kids...
very hot looking family..
He was always going to Vegas to play and eventually ended up playing..
at Peppy's Restaurant in San Pedro, CA on 9th Street..he had a huge following!!
He was quite popular in the 60's..and yes, he does have a voice!
last I heard he was in the Palm Desert area...one of his daughters is a famous manager for talented stars in Hollywood!

I only have a couple of singles by Johnny Prophet one is Evicted from heaven/bw I was born Yesterday, the other (I've Got) Two Arms bw Find A Penny on Carthay 105 (promo). I've always like those records, especially Find A Penny.

As a former DJ, 35 years, I must tell you it is so much fun to find Johnny Prophet fans. But wait, my liking of Johnny is highest with his RCA Victor recordings,
especially Banana. Yes, it may be pure teeny-bop, soft rock, but one heck of a production. Teen rock at in its most pure form.
Johnny, I hope you realize you brought pleasure to a lot of us in 1958. I was one of the kids who bought the RCA sides and, honest to goodness, still play them. As a matter of fact,
it was because I was listening to Banana tonight
that I looked on my computer for your name and found this web-site. Please, let Bill release your LP's.

Johnny and his family were our neighbors in San Pedro (Rancho Palos Verdes). ... Love that voice. We have a couple of his albums and I enjoy him singing Lay Lady Lay. By the way, Johnny, happy birthday on the 15th of March.

I once worked with a young man named John at a Silicon Valley company in 1973 who said his long-lost father had been a singer named Johnny Prophet. This is the first time I've ever seen proof of the existence of a singer by this name. John sang and played guitar on the side and was a lively mimic and jokester, but he had an edge of sarcasm to his personality. He lived with his mother in Milpitas, California, and used a shortened version of his mother's surname Carragher. Have always wondered if he succeeded as a musician.

Johnny worked at my fathers nightclub in Gardena, CA and produced his 1st album under the "Little Caesars" label. I have a picture of Johny and my Father in the recording studio. Last I heard he was living in Palm Desert, I lived in Indio... That was over 6 years ago..

Nice to see that Johnny still lives on in the hearts and minds of his admirers as well as hopefully still in body. I recall meeting him back in the day (late 50's or early 60's) when he either came to our place in RPV, sang at my dad's restaurant in Torrance, CA(Walteria), the Polynesian or perhaps even played at his casino in Reno NV, the Rolo. Matter of fact, I still have an old album or two that he persoannly autographed to my parents & me and my brother/sister as well as stories that will remain with me forever. Glad to see that his son/daughter visited this site to see how much we love the man and value his work as an artist. Thanks for sharing...and let Johnny know that he's made of gold even though his records may only be made of vinyl

Johnny Prophet is my grandfather, thank you for being such a dedicated fan. I will be sure to let him know.

I wish someone would get in touch with me. My Mom - Joan Campione, maiden name Campanella, was his cousin. We use to hang with him, his late wife, Ellen, and the 3 kids wayyyyy back when. Would be nice to know how everyone is doing. They gave us our first dog. A black poodle we named Jet :) Yes, Melissa use to work for Telly Savalas, one year he gave her, for Christmas, a gorgeous convertible with a huge bow wrapped around. Johnny Jr. sang with his Dad at clubs, every now and then. I could go on, but I'll leave it at this and see if someone responds :)

Grew up with the whole family. They were our next door neighbors. Hung out with his son as a kid and even remember taking a trip to Reno with my parents so they could see him perform. Great performer. My parents also live in the desert and many years ago (25) I went went with my dad to watch johnny and his dad perform togeather down there. It was great

Sorry to be the bearer of bad news, but I heard from one his daughters that after a prolonged illness, Mr. Johnny Prophet passed away yesterday, I believe, at her home in San Pedro.

I'm so sorry to hear of Johhny Prophet passing away. I had the great privilege of seeing him perform at the Sands Hotel in Las Vegas in the 80s and I met his daughter Melissa & his son John I also have 3 of his albums (Vinals) big Sinatra connection Reprise and pals. They both retired in Palm Desert. Great singer