"I continued with [my 1960 college newspaper column] "The Misanthrope" on a bi-weekly basis, even though I had subtitled the first one" A One-Shot Column," and it began to attract attention outside the campus, even managing to win a couple of national student journalism competitions. It was thrilling to receive my first hate mail after the Moral Rearmament column. . .consisting of exactly one letter. But it was a phone call I received from L.T. Anderson, city editor and columnist of the newspaper, the "Charleston [West Virginia] Gazette," that meant the most to me and had the greatest impact. A left-of-liberal light shining in a bad old world, Anderson had begun his journalistic crusade to bring a modicum of enlightenment to West Virginia in the mid-1940s.

I'd been reading him almost from the time I was old enough to sound consonants and vowels. He had rung up to congratulate me on my skills as a satirist. It was quite a compliment from someone who knew what he was talking about.

In his column, "Anderson in Reverse," the West Virginia native's Swiftian targets included, among other socio-political phenomena: double think, newspeak, public hypocrisy, but especially my grandmother's old bete noir: crooked, nepotistic, ineffectual and/or do-nothing politicians. In general, Anderson used the power of the written word to drag West Virginia kicking and screaming out of the primeval ooze of fundamentalist superstition into the age of Civil Libertarianism. The opinions expressed in his daily column played a major role in helping the region move through the post-integration era with so little upheaval.

Anderson also campaigned---Always in a tone of amused, detached skepticism---against racism, organized religion, and West Virginia's (at one time) Calvinist liquor laws. And through it all rang out the implicit call to soak the rich and tax the church.

The closest L.T. Anderson ever came to gaining wide attention outside of West Virginia (something in which he apparently has little interest) was during what came to be known nationally as the Kanawha County Text Book Wars, a censorship flap of major proportions played out in Charleston and environs in the mid-1970s when the "futurist/secular humanist/relativist" content of certain textbooks stuck in the craw of local fundamental religionists. The fallout included: up to 1,000 protesters forcing schools to close for days at a time, absenteeism running at 50 to 90 per cent in schools most affected, wildcat strikes by up to 10,000 coal miners in apparent sympathy with the protest, resignations by the school board president and the superintendent of schools, two dynamite blasts, fire bomtings of schools, one shooting and one car blown up. Included on the index of undesirable selections in the various textbooks were writings by Malcolm X, Dick Gregory, Gwendolyn Brooks, Lawrence Ferlinghetti and Allen Ginsberg. Curiously---or not so---nearly all the banned writers were either black or Jewish.

As the factions squared off against one another, beginning in the fall of 1974 and continuing on into the next year, Anderson's was by far the most prominent voice raised in opposition to the book banners. As a result of his journalistic participation in the text book crusade, both as a columnist and as a city editor choreographing the "Gazette" coverage, Calvin Trillan, in his "U.S. Journal" in the "New Yorker," described Anderson as a "columnist who does as much as a man can do to keep the spirit of Mencken alive in West Virginia." In one column LTA likened the protesters to "the crazed nuns of Loudon," going on to trenchantly observe:

'Analysts may sincerely perceive at a distance that what was happening here is a heartwarming class struggle, but I am a hillbilly born and bred, a veteran of many a gospel meeting. I have looked upon thousands of cruel pious faces. I recognize plain and simple religious mania when I see it. It is good to pity the sufferers, but it is mischief to encourage them with illusions to their social frustrations. They have always been welcome at council meetings. They preferred the excitement of revivals.' He then flogged 'Bawl-and-stomp preachers, who must feel something like nymphomaniacs at the Legion convention, and cannot conceal their pleasure at being sought out and questioned for television audiences by men wearing neckties.' In retrospect, the text book debacle can be seen as a dry run for today's slick, well-funded right wing protests whose primary supporters are those that Anderson described so well in his column."

I maintained casual contact with Anderson over the years. He died in 2004 at age 83 after nearly six decades of newspaper writing, which included many thousands of columns. Here is just one example from 1991, chosen by me more-or-less randomly. 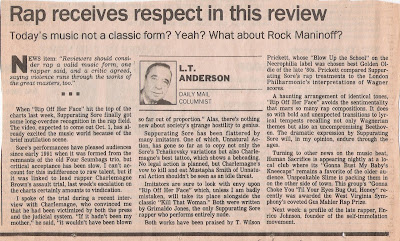 Here is what he wrote to me about my memoir, and his inclusion in it:

You have proved that persons other than movie stars can have interesting, if not necessarily happy lives. You certainly managed to keep me turning the pages.

You also managed to remind me that my own life has been exceptionally drab. You yourself observed that lunch at the mall is an adventure for me.

As to your reference to your days at the Gazette, it is frightening to suppose that any life could be influenced by the likes of me. A man should be careful of what he says in the presence of the young.

Migod, you must be what I once thought was old. Hope you are well. Hope your book sells. I lost your email address.

Thank you for your kind words about my late father. I miss him.
John A. Anderson
john_lil@earthlink.net