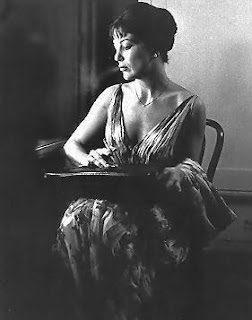 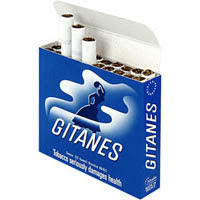 __________
The 1961 pic of singer Annie Ross recently added to the (Yahoo group) Songbirds home page is by my good friend and great jazz photographer Ted Williams. Originally it was in Metronome mag; later on, I spent many years trying to find a copy to replace the one I had lost during my hippie perigrinations. Then one day I was going through Ted's contact sheets and there it was! He made me a print, signed it and the portrait now hangs proudly in my hallway. Maybe Ted could be given credit under the photo on Songbirds?
In the photo Annie is smoking French Gitanes cigs. I know, because another shot of her by Ted from the same date (and also published) shows her holding a box of the damn things. When I saw that, back in '61, I immediately switched from non-filter Camels to this French brand of lungbusters (I was such an impressionable little poseur back then. . .maybe still am). I probably ended up taking even MORE years off my life than if I'd stuck with my original brand o' choice.
Nearly a half-century later, Annie continues to smoke, and I can only hope that by now she's switched to a slightly less lethal coffin nail. As for me, I gave up the feelthy habit aeons ago. Curiously, however, I can still summon up sense memory of how Gitanes tasted; i.e, like inhaling all the fumes of hell.
Posted by Bill Reed at 1:10 PM