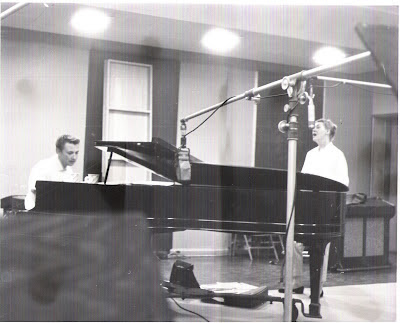 Page in the studio with June Christy
_________________________________
For a couple of hours yesterday afternoon, the lounge at Seasons at Northridge (CA) assisted living facility was definitely the hippest "room" in town when living music legend Page Cavanaugh gave a two-hour concert for fans and friends. Mit rhythm section yet! And all that was missing was a tip jar on the piano. Assisting were his long time cohorts Jason Lingle, drums and Phil Mallory, bass.
After more than a two-year run of serious health issues, the 86-year-old Cavanaugh who has been hors de combat during that time, has recently sprung back into action, playing with the same zest and imagination as of yore, leaving little doubt as to why one or several (?) local wags have come to deem him "The Chairman of the Keyboard." This was his second Sunday afternoon performance at Seasons, where he's been living the past few months.
Page played and sang his way through a healthy chunk of the Great American Songbook, including a 15-minute Fantasia (of sorts) on Sweet Sue that found him journeying farther and farther out in his variations on the theme, but always landing back on his feet after each foray into the pianistic unknown.
But a few of the other songs that he breezed his way through, singing and playing, included Moonlight in Vermont, Wait Till You See Her, Spring is Here and a signature tune, The Three Bears.
Proof that Page has regained his chops (were they ever even gone?) was captured on a recording of the event. If the technical quality is good enough, perhaps it could be made into a CD? "Live From the Rehab Room," perhaps?
It seems like it's about time for Page to get back into action on the local L.A. club circuit that he's so diligently served for the past half-century or so. He's been sorely missed these last couple of years. It'll be nice to have him back.
To my way of thinking Page Cavanaugh is due the Kennedy Center Honors---and if not that, at least a star or two on the Hollywood Walk of Fame. He actually qualifies in three different categories: Radio & TV, Recording, the Movies!
Posted by Bill Reed at 12:23 PM

Many thanks for this joyous report--wish I'd been there. So happy to hear the great pianist is back at (on?) the keys. The most scary-good jazz pianist of all, in my humble opinion. Greatness never ages, I guess.

Very happy to hear that Page is up and at 'em again! He is certainly one of a kind -- hope he will soon be appearing in the L.A. area with Phil and Jason; we've missed them all.