Last week on the subject of singer Bill Black , I was sent the following e-mail:

When I was growing up I lived on the same block as Bill Black. His father ran a small grocery store on the corner. Some of my siblings were in high school with him. His older brother Neil (Neal ?) was also a musician---I believe he may have played bass and may have had a band in the St. Louis area. His mother may also been connected with show business. If I may be of assistance-please contact me---I may be able to point to possible sources. I also would be interested in your findings and your interest.

Good to hear from you. Were you aware that I have released an album by Bill in Japan?

His brother died quite young in an auto accident. I didn't know his name, however, until I just now learned it from you. Yes, he did play bass. His mother died in 1949, and his father sometime in the early 80s. I believe. Bill was a friend of mine in New York City.

Which of my multitude of posts about Bill aka Clay Mundey might you be responding to? I began asking about him on the net 3 or 4 years ago. I had an old recording of an unreleased album that Bill gave me many many years ago. A couple of years back, I sent a copy of it to a friend in Japan as a gift and the next thing you know a record label wanted to release it. They did, and I now work for that label, so I have a very sentimental attachment to Bill. Did you know him personally?

For the first 30 years or so of his life, he led a charmed existence, but then his luck changed radically. But he was always fun and basically of good cheer and twenty years after his death I still miss him. NOW he is somewhat well-known as a result of my issue of his album, and I would like to find other unreleased recordings if there are any remaining. There were, but they most likely have all been thrown out. He lived in the same one room flat in New York for more than twenty years, and when he died, everything was tossed into the garbage. Columnist Nick Clooney in Cincinnati recently did a two-part feature on Bill / Clay a couple of months back*.

Thanks for getting in touch with me.

To which e-mail I received, a few hours later, the following reply:

Recently I was visiting in Granite City and I think Bill's name came up relative to some of the old neighborhoods. When I returned home I did some net surfing. discovered the album and have purchased it on Amazon.com. I received it and realize what a great talent he was. I have purchased a second album and I'm planning to send it to the local PBS station with the writeup. I'm hoping they will play it on the weekly "Swing Sunday" show. Hopefully some of the listening audience may call in or write. Ironically, I worked in Manhattan for many years: Rockefeller Ctr/midtown, Herald Square, Union Square, East side near the Chrysler building even Hells Kitchen-so I may have rubbed shoulders with Bill and not have been aware of it. I knew him the way a kid would know neighbors ( I'm seven years younger). He and his brother were very friendly guys even to the neighborhood kids. I'm sending some of this on to siblings and friends whom I think were actually in class with them.Perhaps one of them may have something on him. I'm also in touch at times with the Granite City Library and Historical Society and the Madison County Illinois Museum and Archives.

Then, I wrote back:

Thank you for your swift response. I am glad you bought the CD. About three months ago a friend called on Sunday morning to inform me: "Bill, Jonathan Schwartz is talking about you on the radio." Perhaps you are familiar with Schwartz. He is probably the finest broadcast purveyor of non-rock music in the country. NPR and XM satellite radio. "Why is he talking about me?," I asked. "He's playing that CD by Bill Black that you released in Japan and talking about how you rescued the tape (actually it was anj acetate), etc." And apparently Schwartz still continues to play it. If there is any peace or justice in the universe, Bill has finally been the recipient of his own little share of it. So many people, famous and otherwise, have written to tell me how much the CD has meant to them. And we have sold a fairly good number of CDs in Japan, especially interesting inasmuch as no one who bought them could have possibly known of him until just recently. His name even fell on deaf ears of hard core Krupa fans I contacted. Just goes to show you the importance of having a good press agent and staying in the public eye. Bill is proof positive that talent alone is not enough to insure one of their rightful place in history of the arts.

Bill did have some day jobs after I met him in 1962, for the musician Eddie Safranski and also Merv Griffin productions as a stand-in on game shows. Also wrote for Soap Opera Digest, and a crossword puzzle magazine.

I am in touch with Bill's oldest and closest friend, Norm, a pianist who was in the '49 Krupa band with him. Norm remained Bill's friend up till the time of his death. That's nearly forty years! He remembers another unreleased album that Bill cut, but he can't quite recall the more important details. Norm once lived in New Jersey and was quite the partygiver, and so for quite a few years Norm and Bill would serenade guests at these occasions. So it is not as if Bill were entirely silenced as a singer. Norm says he remembers a singing job that Bill had in Atlanta around the time of the JFK assassination, but I simply cannot recall Bill ever working professionally during all the 13 or so years I knew him in New York. I never went to those parties because I was barely out of my teens at the time, and I just didn't think I would fit in with people so much my senior. But in talking to Norm recently, it turns out that it wasn't like that at all. More like family affairs with kids and backyard croquet, etc. Bill apparently still had a knack for playing with and being comfortable around children. So it's a pity I didn't ever attend.

* In case you did not see the stories, are the two that Nick Clooney did about Bill Black. (click to enlarge) 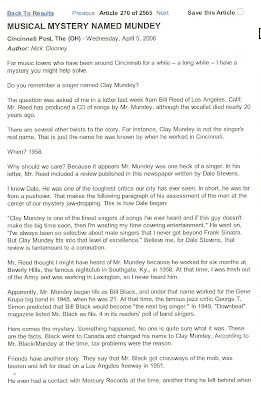 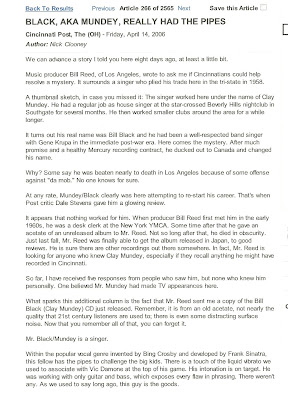 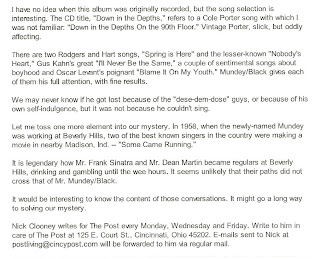