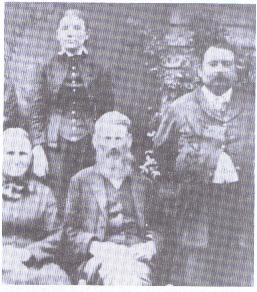 In 1898, slightly more than forty years before I was born, my great grandfather, journalist-hyphenate Clayburn Pierson --- in a manner mixing boosterism along with solid economic sense --- wrote about my West Virginia home town as follows:

"With great natural resources and natural facilities, Charleston ought to have surpassed any other town in the state. Instead, all depended on local trade and none with courage to risk an Almighty Dollar in an effort to start any one of the numerous industries that would have made Charleston today the most prosperous city in the land."

When the political boat listed to the right, Pierson, to judge from his surviving newspaper articles, moved his seat compensatorily to the left, and in more radical times, vice versa. At one juncture or another he was, contradictorily, a member of the isolationist Know Nothing Party and a supporter of isolationist Millard Filmore; 180 degrees from that enthusiasm, a supporter of popular utopian writer Edward Bellamy and, at some point in time, a fervent socialist.
Clearly he was at war with himself politically and economically. He had earned the right.

Born in 1825 in Nicholas County, West Virginia, Clayburn was but latest addition to a nearly unbroken line of illegitimacy stretching back four generations, with his great grandmother, Sally McKee, having been an indentured servant to a family in Virginia. Since, in all of his voluminous writings, Pierson made no mention of his personal background, nor did anyone ever hear him talk about his forbearers, it has always been a family assumption that he ran away from home and took full adult responsibility for himself while in his mid-teens. Like many persons of his era --- and making matters worse, the extreme Dickensian circumstances of his existence---my great grandfather was able to secure for himself only a very rudimentary education. And yet, in spite of this, he managed, in 1847 at age 22, to become a school teacher. Later, he was a land surveyor; a lawyer; postmaster; superintendent of Clay County, West Virginia schools; beginning in 1877, a clerk of the circuit court; and a hotel owner and publisher of the weekly "Clay County Star," where some of his Bret Harte-like pieces, such as "One Thousand Feet Under Droop Mountain," The Devil's Den," and "A Bear Hunt of Sixty Years Ago" first appeared.

"Pierson was honest, earnest and frank, and a lasting friend. He never received any financial remuneration from his writing, and it is hard to understand how, driven by the perpetual necessity of working early and late, to support a large family, he found time for the amount of reading and writing he did. He just loved to read and write. . .."

I've managed to amass a fairly impressive collection of my great grandfathers works and whenever reading them, I never fail to be amazed by the fact that someone bom a century-and-three-quarters ago could obtain to such clean, lucid, grammatically correct, perfectly punctuated prose; and how someone from such lowly circumstances could attain such a high standing in his community.

An early advocate against smoking and consumption of alcohol---for strictly medical reasons---still his rather advanced scientism was not enough to save him from marrying his FIRST cousin. As a result, his sons William and Benton were deaf mutes and a daughter, Mary, was born blind. As for his daughter, Corinda (my grandmother), although she had no obvious physical abnormalities, the legend persists that she was "mean as a snake."

Such an extraordinary and accomplished character for a great grandfather! Perhaps I will post one of his stories-fables-tall tales on this site in the near future.
Posted by Bill Reed at 7:02 AM