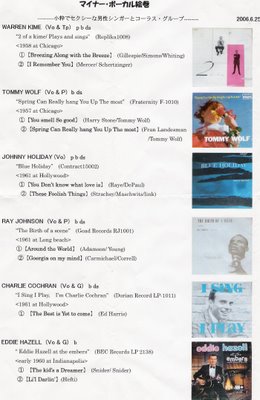 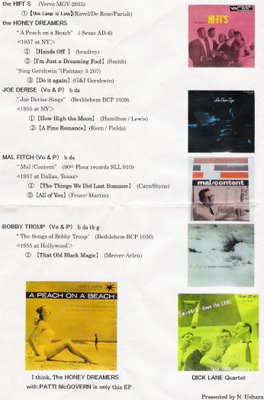 Well into the 1970s LPs remained so expensive to acquire in Japan that the long-standing tradition of record listening clubs still existed. Certainly, such fraternities stretched back to at least immediately post-WWII, and most likely before. The central premise of these outfits was that ONE member would most likely be designated to spring for an album that other members of the club were interested in hearing but could not necessarily afford to buy, and then at a pre-determined time, all others would gather in a bar of coffee shop to listen to the recording in question, followed by a discussion afterward. Perhaps a bit of sake quaffing was also part of the equation.

Alhtough, CDs are still a bit pricey in Japan (just look at how much Japanese imports still cost on amazon.com) they are now cheap enough to have eliminated the main raison d'etre for such clubs. But old habits die harder in Japan than perhaps anywhere else in the world (!); thus, there still remain a healthy number of such fraternities in that country.

One that I am familiar with in particular is the Tokyo Vocal Jazz Appreciation Society, founded more than a quarter-century ago by Japanese jazz critic, Keizo Takada, who also happens to be a good friend. I have even attended one of their meetings and trust that will qualify me as an honorary member. I even hope that when I go to Tokyo again in December I might have the chance to present a program of my own, entitled "Female One-Album Wonders." (With cue cards in romanized Japanese!)

I would never dream of a program any less recherche than that. This is real serious stuff, as should be obvious by the program of their latest (6/25/05) gathering just sent to me by Takada san. The presentation, by Mister Noboru Uehara, was entitled "Minor Vocal Panorama: Smart and Sexy Male Singers and Vocal Ensembles." A brief speech is made before each record is spun, and then members listen in respectful silence in the darkened Beatnik-y cellar that reminds me a bit of the one in which Audrey Hepburn sang in Funny Face.

All of these "Smart and Sexy" sides are long out-of-print EXCEPT for the Troup and Derise, which come and go, and the very worthy Mal Fitch album, which I am proud to say that I've had a hand in bringing back into print come August 29th on SSJ Records. (I even had the chance to talk with Fitch for quite a while on the phone recently: "I'm eighty years old, but I'm not planning to die anytime soon.")

I recently release-produced a Tommy Wolf CD songbook in Japan. And Charlie Cochran is a friend (that is his very first ultra rare LP pictured here) of mine. He has a brand new CD available at cdbaby. But I must confess total ignorance of five of the singers or groups, i.e. Kime, Johnson, Hi-Fi's, Dick Lane, and Eddie Hazell (though I have been able to google varying degrees of info about them since receipt of the TVJAS program). And in the case of Johnny Holiday, a particular favorite of mine, I was completely unaware of the existence of the album from which his two tracks were drawn.

It is especially obvious from "Minor Vocal Panorama" that these Japanese vocal jazz fans, in the immortal words of Ricky Nelson, "don't mess around, boy."
Posted by Bill Reed at 11:41 PM