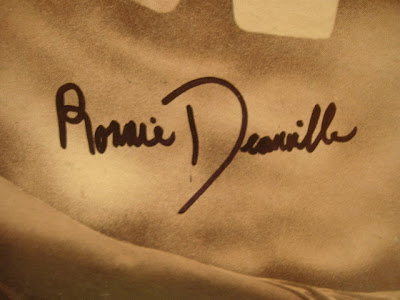 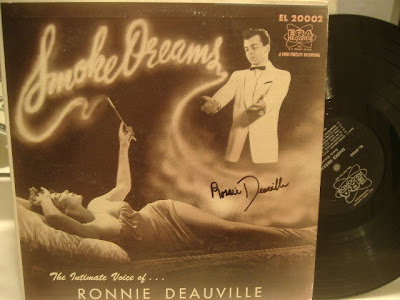 ___________
A couple of rare tracks by Ronnie Deauville from one of those 1950s budget label collection of songs from the movies.
* Young at Heart
* Three Coins in the Fountain
And here is the title track from Deauville's above-pictured 1956 LP along with "Laura," an Era single.
Posted by Bill Reed at 2:26 PM

Ithink you once told me that reissue rights were tied up for Ronnie Deauville. I almost wish someone would bootleg this material on CD (even though I have it all on vinyl). His tracks as a band singer, all of his singles, and all of his LPs should be issued along with a good essay on his unusual biography. Was it Steve Allen who promoted Smoke Dreams on TV after Ronnie's terrible car accident? This led to massive pressings and wide distribution. But watch out..some of the pressings were on the worst materials and have terrible sound. There are some quiet vinyl pressings, and with luck you may get one.

Male singers need more attention. Too many people will do anything to get any record by any female singer, and pass by the great male singers. Deauville was one of the best, but unfortunately did not publish many records.

My memory is poor...of course Ronnie had polio...it wasn't a traffic accident that sidelined him. Please correct my post

Ronnie got polio in 1956. It came on after a head on collision early one morning as he was on his way to cut a record. A car crossed over the double line and hit Ronnie northbound on Western Avenue in Los Angeles. He was thrown from the car and left unconscious. It was almost two weeks later that the paralysis started to move quickly along with a fever. He was rushed to Midway hospital and then transferred to Los Angeles County Hospital as his condition worsened. They met him the parking lot with a portable iron lung. He almost died, however due to the development of his diaphragm from singing he made it. He remained in an iron lung for over a year, completely paralyzed. He was officially diagnosed with "Clinical Polio." What that meant was they were not sure how much of the accident contributed to the condition as well!!! Ronnie Deauville was a bright light in the world until the day he died....